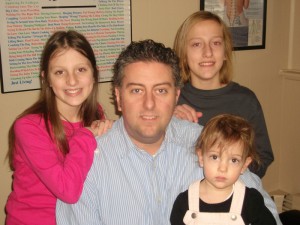 Dr. Stamatis V. Tsamoutalidis ("Dr. Tom") was born in Athens Greece. His family moved to Bethlehem when he was four, and this is where he grew up. He is the oldest of four boys and the first of 2 chiropractors in the family (one of his younger brothers practices in the Los Angeles, Ca area).


In 1998, he married Bethlehem native Tracy (Flores) Tsamoutalidis and started a family soon after. He has a wonderful son named Vasilis and two beautiful girls named Alexia and Eva, whom you will probably see in the office from time to time.


Dr. Tsamoutalidis can be found throughout the community giving presentations on chiropractic to small organizations and large corporations alike. He is willing to talk just about anywhere he is given the chance to let people know about chiropractic.


He has been in active practice adjusting children and their parents since 1999. He has always maintained a home-office.