In the carnival game Whack-a-Mole, the object is to use a rubber mallet to hit as many critters as possible when they pop up in random succession. Trouble is, as you hit one mole, three more pop up and disappear before you can nail them all.

Whack-a-Mole is a perfect example of how doctors medicate Americans today. As soon as they prescribe one drug, more new symptoms (side effects) pop up that will usually require more drugs.  In fact, many of the drugs doctors prescribe are given to counteract the side effects of ones they already gave.  Sadly in their game, you end up on a ton of different drugs, for a bunch of different problems, with no actual improvement in your health.

According to Generation Rx, in 2004  the number of prescription drugs used by the average American annually was twelve.  This amazes me since my children (as of this email, ages 11, 8, and almost 10 months old) have never taken any drugs ever.  I haven't taken so much as an aspirin since 1993.  Which means that there are many people taking more than 12 drugs a year to make up for our lack of drug use.

Data from FamiliesUSA.org show the average number of prescriptions taken per senior citizen grew from 19.6 in 1992 to 28.5 in 2000, an increase of 45 percent.  By this year (2010) the average number of prescriptions per elderly person is projected to grow to 38.5, an increase of 10 prescriptions or 35 percent per senior since 2000.  Yet despite taking all these drugs, we embarrassingly rank 37th (if not worse) among the world’s industrial countries when it comes to overall health!  This article is not meant to bash medicine, just to point out that chasing symtpoms and looking for health to come from the outside is a flawed paradigm.

In Chiropractic, health is not defined by how many symptoms you can temporarily ‘whack away’, but how well your body can heal and function under its own Power.  You have more healing ability in your little finger than all the drug companies and hospitals in the world put together.  Neither big pharma nor modern medicine believes that (or at least admits that they do), but Chiropractic knows it.  If you maintain a clear nerve system, eat right, get enough exercise and rest, and maintain a clear positive focus on life, you’ll have a better chance of staying out of their failing whack-a-symptom game.  Many of you already are out of that game since you've begun care here.  Please share your success with others. 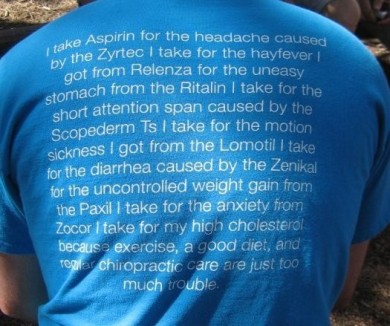